Though this site is written in English, automated translations are available courtesy of Google Translate (select your language at the top right) – we apologise for any errors.

The content of Swami’s teaching has been passed down from the ancient rishis (the ancient sages of India) via the traditional Gurus (gu – darkness; ru – that which dispels; Self-Realised spiritual masters) following the ancient Vedic wisdom of Sanatana Dharma (the “Eternal Truth”), which lies at the foundations of Hinduism.

Although this tradition forms the background of Swami’s work, all are welcome to visit Him – irrespective of different backgrounds and belief systems – to receive His blessings and to experience the unconditional love and light which Swami radiates to everyone.

Swami is from a small village just outside Kannur (formerly ‘Cannanore’) in Kerala, South India. He has three ashrams. 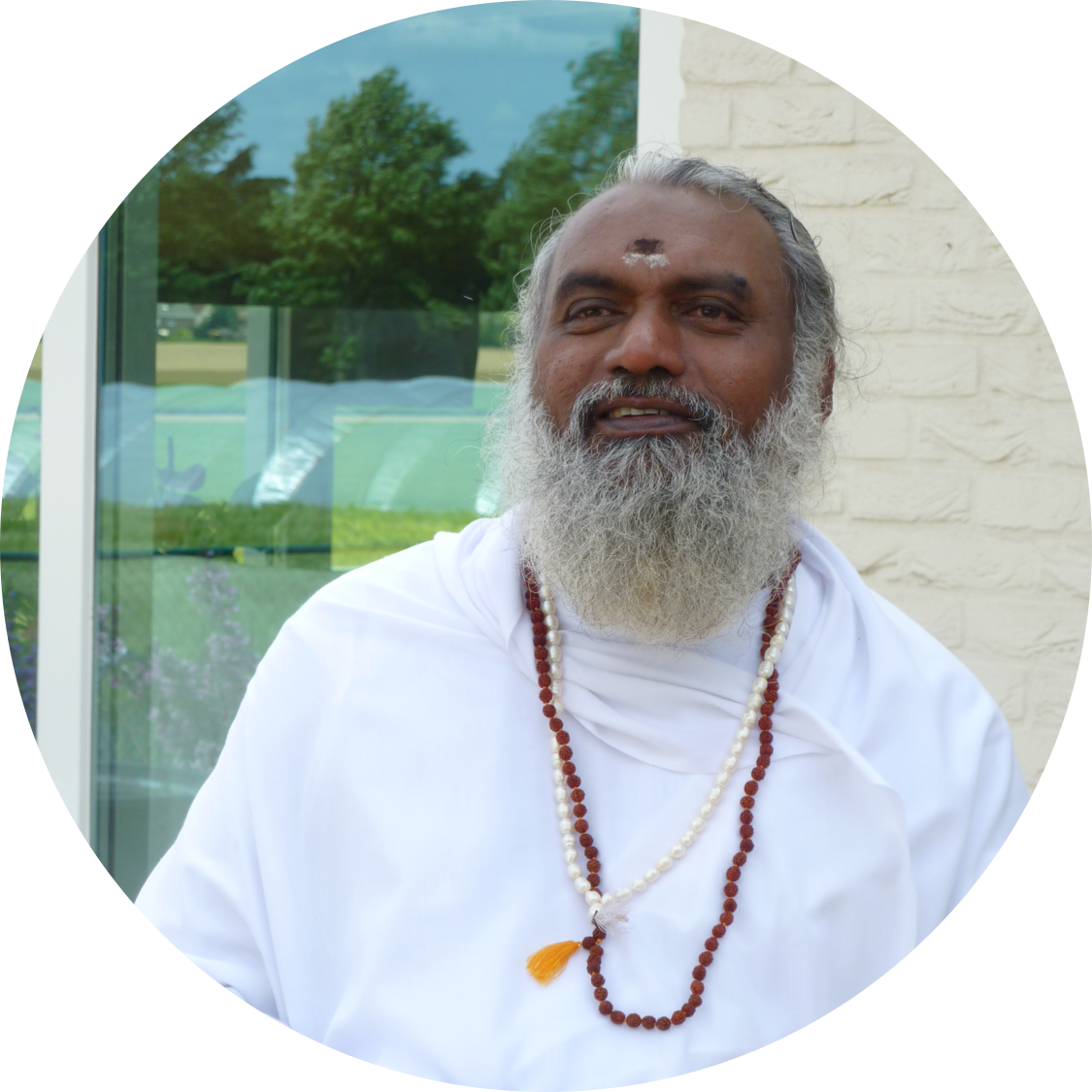 A Short Biography of Swami

Swami Atmachaithanya was born in the small village of Uppaychal, a poor rural community in southwest India. The village lies on the coast, a few miles outside the town of Kannur in the state of Kerala. Swami’s father left the family shortly after his birth and he lived with his mother and elder sister in their house in the village.

Throughout his early childhood Swami suffered from hunger and extreme poverty, as well as from strict treatment and beatings from his family and relatives. Nevertheless the young boy showed remarkable kindness towards others and a great reverence for the Divine. From the age of three, Swami was occasionally found playing with snakes, sometimes draping them around his neck. Indeed on several occasions he was bitten by a snake while swimming but miraculously suffered no ill effect. As he grew older he would spend time meditating and visiting local temples. He kept the image of Lord Shiva constantly in his mind and attained Self-realisation at the age of seven. Around this time he also began to have visions of various Divine personalities.

Swami first met Ramananda Saraswathy at the age of eleven, in 1975. This holy man was to became an important figure in Swami’s life and in the years that followed Swami travelled with him across India for extended periods. They visited holy places and temples, from Kanyakumari in the far south to Rishikesh in the foothills of the Himalayas. After three years of travelling, Swami’s Guru, Ramananda Saraswathy, finally attained Samadhi in 1980.

Many people used to visit Swami after hearing about his divinity; some would ask him for information about their past and future, while others came to benefit from his miraculous healing powers. Then, as now, Swami asked for no payment for the help that he gave, but with the donations that were left he was able to offer some assistance to the poor and destitute who came to him.

In 1982, a holy man told Swami that he would construct an Ashram called ‘Shanthi Madam’, meaning ‘Abode of Peace’. Two years later building work began on this Ashram, on the site of Swami’s mother’s house in Uppaychal. The Ashram has several small temples and ten rooms for visitors. A large temple for ceremonies and a Kailasam with life-size figures of Lord Shiva, the Goddess Parvathi and Lord Ganesha would be completed several years later.

In January 1989, two visitors arrived at Shanthi Madam from England. Ian Best and Sue Levene were travelling around India when they first heard about Swami and decided to visit him in his Ashram. Their visit lasted two months and they became firm devotees of Swami, inviting him to visit London the following year. Thus Swami made his first trip to Hackney in East London in 1990. This trip to the UK has been repeated every year since then, and was later extended to include the USA and many other countries. Wherever he travelled, people benefited spiritually and received peace of mind from being in Swami’s presence, whilst some of those who came for help also gained relief from mental and physical ailments. The number of foreign devotees has gradually grown and regular spiritual meetings are held in Swami’s name.

In 1998 construction of Swami’s second Ashram ‘Chaithanya Puri’ began at Nayattupara in Kovoor, some 30 km east of Kannur. As well as building a temple to Lord Krishna and a beautiful garden, work was begun on a hospital at the new site. The suffering of mothers with their young children had stayed in Swami’s mind since his own childhood and he used to pray to Lord Shiva that he might one day be able to relieve the suffering of everyone through the provision of free medicine. The hospital currently functions as a free homeopathic centre and dispensary for local people who come daily to receive treatment. It is run by Swami and his dedicated staff. This work is supported entirely from donations from Swami’s friends and devotees, as well as from some of the patients.

The building of a large spiritual centre with a meditation hall, temple, and 36 rooms for visiting devotees began in 2002 at Chaithanya Puri Ashram and is now complete. Swami has further plans to build a large dining hall and an old people’s home, the overall vision being to provide relief to the poor and vulnerable in the community. The dining hall will offer good, simple food free of charge to all who come and the home will provide shelter for the elderly and destitute. There are also plans to build a Naturopathic teaching hospital and a centre for Vedic Learning, Yoga and Vedanta to promote the dissemination of spiritual knowledge.

Swami is the Founder & Managing Trustee of the Shanti Madom Trust, formed in 1991. The trust operates three Ashrams in India (Shanti Madom and Chaithanya Puri in Kerala, plus an Ashram in Bangalore, Karnataka State) and under his leadership and guidance carries out numerous charitable & philanthropic activities, such as medical and financial relief, pensions for the old and widowed, educational aid, training facilities for women’s empowerment and upliftment from exploitation.

BE A PART OF OUR COMMUNITY

We are very pleased that our tight group of followers grows every day. Without the volunteers and donations our cause would not be what it is today.